Nowadays our political intercourse is threaded with hate. We cannot see the other side’s honestly held beliefs and opinions as real or of value. This fog of hate and distrust prevents each from seeing the other as part of humanity, like himself. Every little online posting, every snippet of negative information which colors the perception of the other side is grabbed and elevated to a new level of importance beyond its real and actual value. And every opportunity to paint a darkened image of the other’s deeds is amplified by the 24 hour news cycle’s hunger for sensationalism.

Who can summon up the courage to cross this barrier and communicate evenly and fairly? And who on the other side cares to actually listen, as though there might be some truth and value in an opposing opinion, no matter how distant from one’s own?

Sometimes humor is the answer. Sometimes a wonderful joke or a silly story can loosen the ties of hate and mistrust. Franklin Delano Roosevelt, our 32nd president had this gift. FDR could look at the ridiculousness of a negative story and commandeer it as a weapon to answer his most ardent critics. One time he used this gift in answering the charge that he ordered a Navy Destroyer to return to the Aleutian Islands to retrieve his dog, Fala. Fala and Roosevelt were inseparable during his Presidency, making Fala one of the most well-known Presidential pooches and the only one to have his statue erected at a presidential memorial in DC.

Roosevelt countered his accusers in a speech to a meeting of The Teamsters with this now famous retort which deserves a label as one of the most memorable take-downs in American politics. 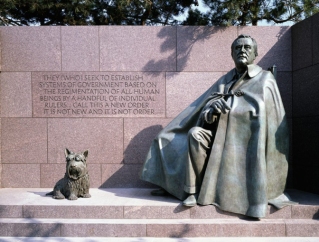 Click on this photo for a video of that wonderful speech!